The OBITools software is a set of tools specifically designed for processing Next Generation Sequencing data in a DNA metabarcoding context, taking into account taxonomic information. They are distributed as an open source software available on the following website: http://metabarcoding.org/obitools.

Data description: a bit of biology 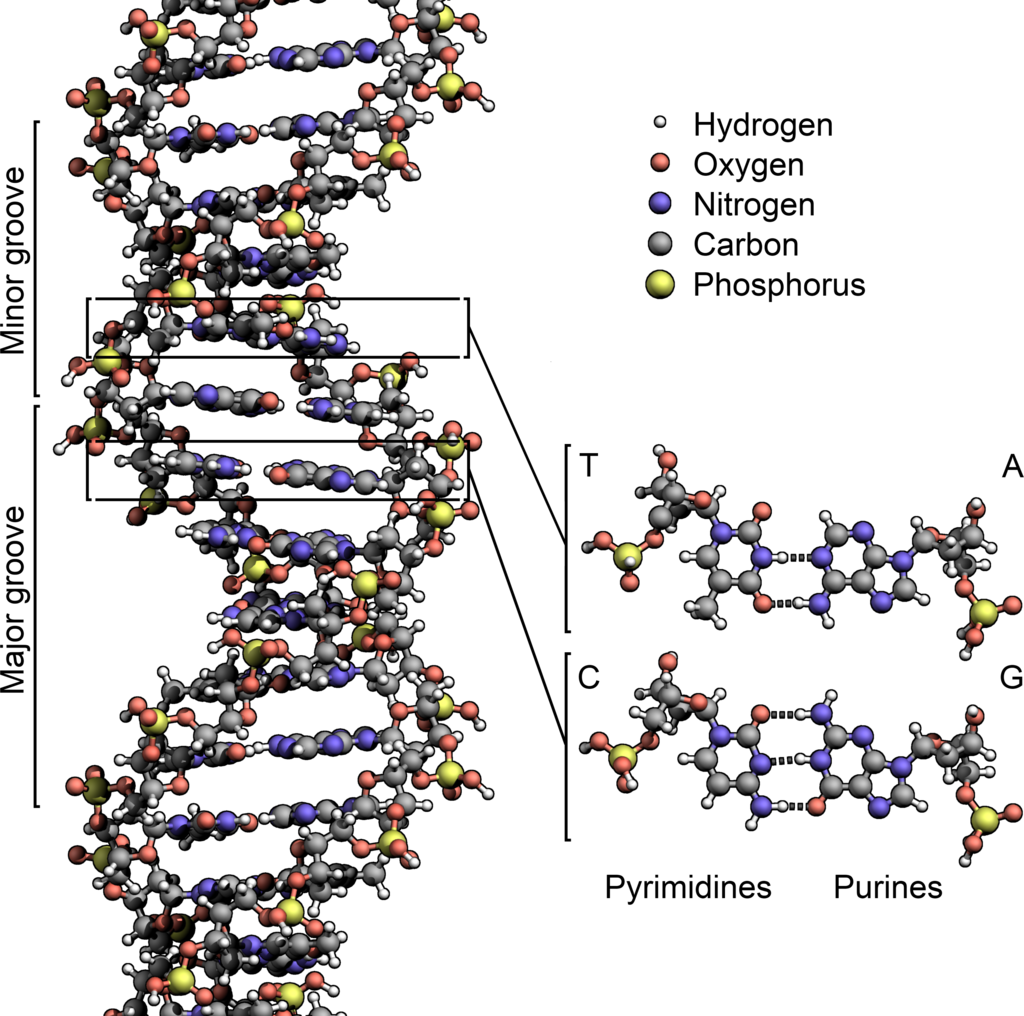 Deoxyribonucleic acid (DNA) is a molecule composed of two polynucleotide chains that coil around each other to form a double helix carrying genetic information for development of all living organisms.

Determining the order of the nucleotides composing a DNA molecule is known as DNA sequencing. In metabarcoding context we want to target barcode sequence exclusively. Barcode are DNA sequence of gene from mitochondrion with the following property:

The conservative region is typical of the taxonomic group we want to target (e.g. teleostei). The conservative region will be used as primer to initiate the PCR. The hypervariable region is the barcode sequence itself, it permits to identify at species level. In metabarcoding, barcode sequences from a sample are targeted and ampliflied by PCR using primer. Then the isolated DNA barcodes are pooled with barcode sequences from other samples. A tag sequence of 8 nucleotides is added to each DNA fragments from a given sample. So that it will be possible to assign the sample of a given DNA fragment in downstream analysis.

DNA sequencing is performed on the library of amplified DNA barcodes. The sequencing of illumina instrument is paired-end. Adaptors are annealed to the ends of DNA fragments. Fragments bind to primer-loaded flow cell and bridge PCR reactions amplify each bound fragment to produce clusters of fragments. During each sequencing cycle, one fluorophore attached nucleotide is added to the growing strands. Laser excites the fluorophores in all the fragments that are being sequenced and an optic scanner collects the signals from each fragment cluster. Then the sequencing terminator is removed and the next sequencing cycle starts.

FASTQ stands for FASTA Quality. They are raw data produced by sequencing instrument. Each sequence is a read. For each DNA sequence, a quality of sequencing sequence is associated.

Here is a table of how to interpret a range of Phred Quality Scores.

We sequenced each DNA fragment as paired-end meaning from both extremities:

Our aims will be to reconstitute the original DNA fragment sequence from forward and reverse reads and then to isolate, filter and cluster barcode sequences. Then a taxon will be assigned to each barcode allowing detection of species in samples. 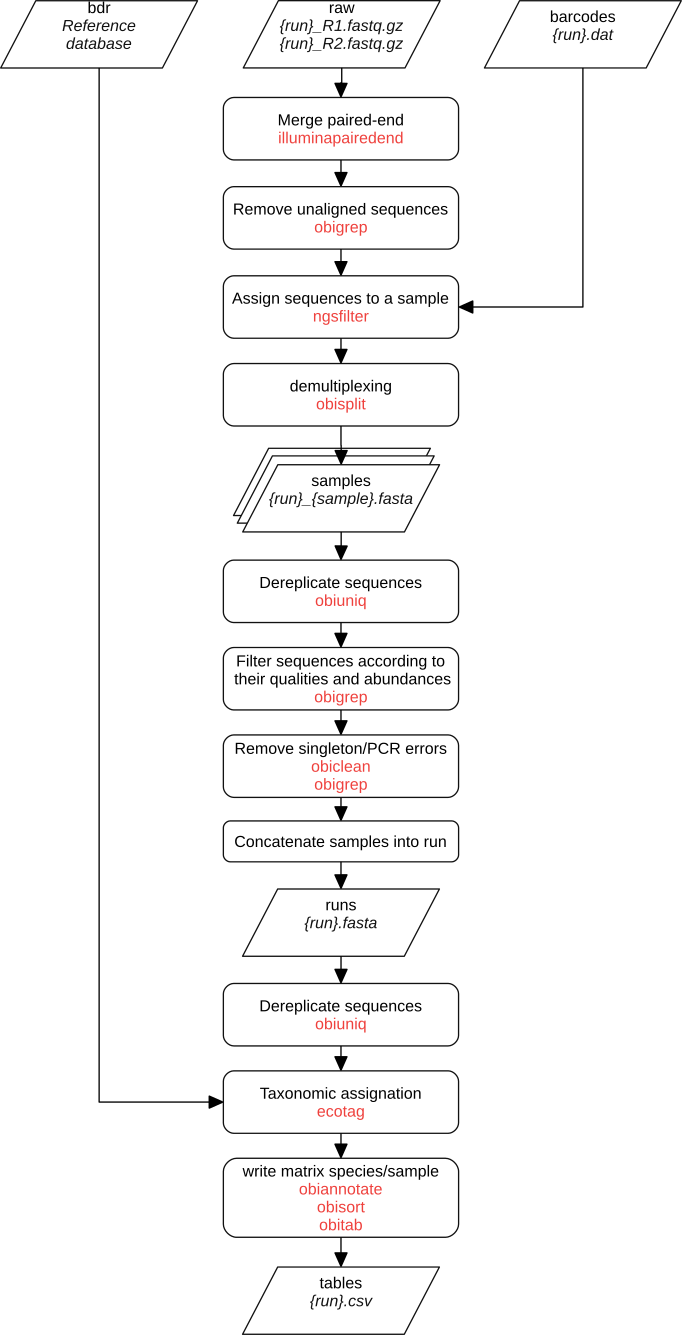 illuminapairedend aligns and merges the forward and the reverse reads of a couple of paired-end sequences. When the two reads overlap with a high alignment quality score, the consensus sequence is produced.

Multiplex sequencing is a technology to sequence multiple samples at the same time on a high-throughput DNA sequencer. Samples are distinguished by the short prefix of a DNA sequence called DNA tag. The demultiplex step consists to assign to each DNA sequence its original sample.

ngsfilter seeks for tag and primer sequences in both 5' and 3' direction of each consensus sequence. The primers and tags sequences are removed and annotations about the corresponding sample is added as new attributes.

obiclean annotates the barcode sequences with the tags head, internal or singleton. The tag head corresponds to sequences that possess variant sequences in the dataset without being the variant of another record. Their variants are tagged as internal. The remaining sequences are annotated with the tag singleton. A variant must be related to the head sequence record with a number of differences in the alignment under a threshold value and is defined by a ratio between its count and the count of the head sequence which must be lower than a value fixed between 0 and 1. The command obigrep is then used to get rid of internal sequences.

The reference database is a set of barcode sequences representative of taxon group such as species. Each taxon is located on the NCBI tree of life.

Here the strategy to build a reference database for metabarcoding:

Some unuseful attributes are removed. The barcode sequences are sorted by decreasing order of count. Finally, a tab-delimited file that can be open by excel or R is generated. The table is a matrix with row as barcode sequences cluster and colon as sample abundance. Taxonomic assignment for each barcode sequence is mentionned.

Thanks to OBItools we were able to process eDNA raw sequencing data in order to detect species among samples. First, DNA fragments are merged, then demultiplexed (each sequence is assigned to its original sample). Third, sequence barcodes are extracted, filtered and clustered by similarity. Then a taxon is assigned to each barcode sequences. Ultimately, a table of environmental presence of each species abundance among samples is produced allowing further analysis.